Copyright © 2007, Oregon Kayaking. No part of this page may be reproduced, linked, or copied without the express written permission of the Oregon Kayaking webmaster. Canyon Creek Washington is one of the Pacific Northwests most precious whitewater resources. This run is beloved by paddlers of every variety, and for good reason: Reliable flows, big, clean drops, and beautiful canyon scenery make this creek well worth paddling. We are very fortunate to have such a fine creek within an hour of Portland, and after-work runs are a common occurrence. The Canyon Creek we know and love today was almost lost forever in the nineties. In 1991 a developer obtained a permit to de-water Canyon Creek to generate electricity. These 'micro-hydro' projects are particularly insidious and tend to fly under the radar. They do not require large dams or other major construction, yet they still effectively destroy rivers and creeks by diverting water through a pipe to generate power. In response to this threat, American Whitewater Regional Coordinator Andrew Wulfers and Alder Creek Kayak and Canoe organized the first-ever Canyon Creek race to raise awareness about this run. This strong show of support combined with low power prices stalled the de-watering project, but the permit to de-water Canyon Creek still exists today.

Oregon Kayaking's mission statement reads: "This non-profit, independent site is meant to be a source of information about PADDLING and PRESERVING our precious rivers and creeks." The primary way I do this is by demonstrating an indisputable record of use, which is important when it comes time for hydroelectric licensing and re-licensing. I try not to be too political on this site, but we need to remain vigilant because the need for power will only increase over time. I strongly encourage all paddlers to join American Whitewater; this superb non-profit organization works hard to protect Canyon Creek and countless other rivers and creeks across the country.

The Canyon Creek down river race is still alive and well today, and Canyon Creek flows healthy and strong from October through May, except in very dry years. Paddlers from around the world have paddled and continue to enjoy this classic, endangered run.

When arriving at the put-in for Canyon Creek, paddlers often check the flows on the downstream creek-left bridge piling, which is known as 'The Unit'. Generally a good first-time flow is level with the base of the unit. The creek becomes class V above about three inches the unit, and has been run as high as 30 inches above the unit ( see chart at the end of this report for unit measurements and flow correlations ).

If you put in at the bridge, the first major rapid is Swizzle Sticks ( Aka Entrance ), named for the logs that used to extend down from the wall into this rapid. Scout right and get ready for your first big hole of the day..

Mike Novak runs Swizzle Sticks, or Entrance drop.
This rapid changed in the flood of 2006, when the logs were pushed downstream.
photo by Brian Vogt

Kris Wilson blasts through Swizzle Sticks during an outlandishly high floodstage run ( at 30 inches above the unit ).
The logs that gave this rapid its name ( visible in the photo ) were washed away in the 2006 flood.
photo by Jim Pytel

Below Swizzle Sticks the gradient cools off briefly, allowing paddlers to enjoy the scenery. Just downstream from here is a bridge high overhead, where bungee-jumpers are often seen on the weekends.

The first serious drop on Canyon Creek is the appropriately named 'Terminator', which appears just downstream of the high bridge. You can scout Terminator from just upstream of the drop on either side and set safety on the right. Terminator has a big, powerful hole that has mauled lots of paddlers. Drive left and boof hard to avoid the hole, which gets worse the farther right you go..

If someone swims Terminator, there isn't a lot of recovery time before the next drop, so be sure to fish out any swimmers quickly! Below Terminator the walls close in and there is a fun slide that is somewhat difficult to scout though you can eddy out at the lip and peek over the edge.

Below this drop things calm down again, but things get going again with Thrasher Prelude and Thrasher. Scout these drops on the left, and pay particular attention to the hole which gives Thrasher it's name..

Below Thrasher the walls peel back a bit and the creek tumbles through a boulder garden with a big hole at the bottom, scout and/or portage on the left side. Below this boulder garden the creek mellows as you approach the 'Drop Zone', where the creek roars over four large drops.

The first falls in the drop zone is known as 'Big Falls', which has a convenient scouting platform on the right side ( this drop is also sometimes referred to as 'Big Kahuna' by the most recent generation of paddlers ). This 17-foot drop is about as clean as you could ask for at most flows, but it gets burly at high water.

You can run this drop any way you like, but most take the nice boof on the right side. Be sure to scout this drop carefully, because there are undercut walls on either side, especially on the downstream creek-right side. Paddlers who chose to portage Big Falls will have to do a throw-and-go into the pool below as the creek is totally gorged-out at this point.

Here's a couple of photos of Big Falls/Big Kahuna from various angles..

Si Wiles ( visiting from the UK ) fires up the Big Falls.
photo by Mark Rainsley

Mike Novak runs Big Falls, viewed from the side. The undercut walls are clearly visible here.
photo by Brian Vogt

Nate Garr airs it out at Champaign. The Hammering Spot is clearly visible on the bottom creek-left side.
photo by Mike Long

Kris Wilson below the Hammering spot during a floodstage run down Canyon Creek ( 30 inches above the unit ).
photo by Jim Pytel 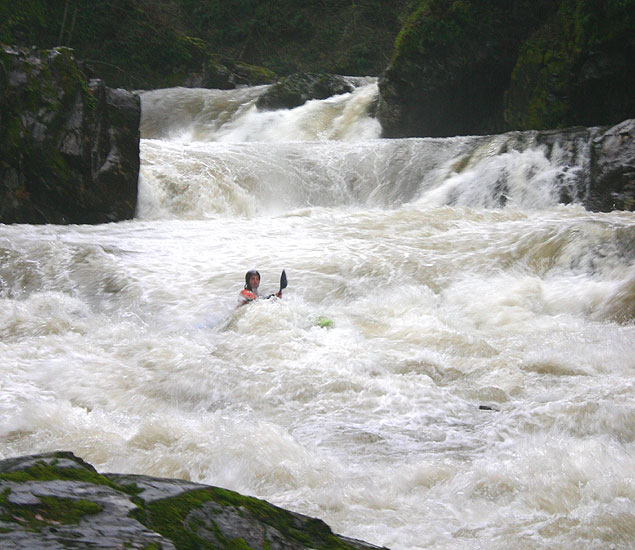 Below the Hammering Spot is another big horizon line marking Tobys, the first recommended portage. Toby Scarpella drowned running this ledge on March 7th, 2000 and there have been several other close calls. There are invisible rocks in the landing that pose a severe entrapment risk, so I highly recommend portaging this drop on creek left.

Bob Lee and friends below Tobys. The portage ledge is visible on creek-left.
photo by Brad Bassi

Just below Tobys the creek comes crashing to a stop in the slackwater of Merwin Reservoir. From here it is about a mile or so of flatwater slogging to reach the take out.

While there is no direct internet gauge for Canyon Creek, the USGS internet gauge EF Lewis at Heisson correlates nicely with the foot gauge at the put-in bridge. Canyon Creek runs October through May, except during drought years. The fact that this creek runs for eight months out of the year combined with its proximity to Portland makes it one of the most-paddled creeks in the Northwest.

The general rule for flows is anything below the unit is low, and anything above the unit is high. If the water is level with the unit the creek is at a medium level, which roughly corresponds with 1,200 on the East Fork Lewis gauge.

A map with a red dotted line showing the normally run section of Canyon Creek.
Be sure to hug the left bank on the paddle out across the reservior.

For directions to the put-in and take-out, as well as other info, pick up the second edition of the bible, Jeff Bennetts 'A guide to the Whitewater Rivers of Washington', a book no serious Northwest paddler should be without. You can pick this book up at your local paddling shop, or on amazon.com.