Copyright © 2001, Oregon Kayaking. No part of this page may be reproduced, linked, or copied without the express written permission of the Oregon Kayaking Webmaster.
This week it rained a bit and though the Husom gauge far downstream hadn't budged we knew the river would be coming up fast and would provide an interesting day on the Green Truss.

Tim, Tom, Dave and I headed up to Green Truss Bridge where we met three Eugene area boaters, one of whom is sponsored by Perception. The river was muddy and it looked like a good flow so everyone was psyched. We lowered the boats down the cliff and headed down the river with high hopes for a great day of boating. At this point I figured we were way past critical mass for carnage and that the day would probably be pretty eventful! Because of this, I let the trio from Eugene take off ahead of us so we would have more room in the eddies, figuring we would catch up with them at Big Brother Falls.

Everything was going well until we got to Bob's Falls. At this flow Bob's is essentially a big low head dam and has a menacing hole which has hammered legions of skilled paddlers. I boofed so hard here on the left that I hit the wall, much to Dave's delight, who whooped good naturedly at my goof. It was pretty funny, though at the time I was a little worried I might have broken another boat... Dave and Tom ran the falls no problem and then the ledge just downstream, leaving me in the pool to wait for Tim. Now, the left boof here is tricky as you have to paddle aggressively across the strong current at the top of the falls and land in the eddy. Folks often miss it, and it was just a matter of time...

As Tim dropped over he underestimated the speed of the current penciled in on the left side of the hole. He came out upside down and as I watched he set up his roll on the edge of the boil line as the falls decided whether or not it wanted to have another kayaker for lunch. My pulse shot up in anticipation of a rescue but luckily Tim snapped up quickly and narrowly escaped what would likely have been a Religious Experience in that hole.

Soon we arrived at Big Brother and joined the three guys from Eugene, who were practically frothing at the mouth to run the falls. In case you've never been there, the trick on this 28 footer is to run the cross currents at the top (the current flows strongly parallel to the lip of the falls) in such a way that you come into the falls from right to left and then pivot at the last second on a crucial three foot wide boof flake and drop down into a very narrow landing zone with a cave on the right and a shallow landing on the left. The line is very, very thin, and the cave (visible below, river-right side) has taken a life and stolen many paddles. The current pushes strongly into the cave, so if you flip when you land you are going to be doing some cave exploration.

First up is Dave Grove (the Perception Guy). He runs it perfectly, avoids the cave, and paddles downstream. Josh Bechtol runs it perfectly too, no problem. The next guy (Ty) is a bit too slow and misses the boof. He hits the bottom, flips, and (you guessed it) goes right in the cave. He's in there for a good twenty seconds upside down before the currents swirl him away from the walls and he can roll up. He then paddles like crazy against the currents pushing into the cave and then makes it out OK.

Of course Dave Mcneil sees none of this as he waits calmly in the pool above...

Ok. Now Dave has never run the Green Truss before but he has run way gnarlier drops than this so he is very confident he can hit his line. He watched Dave Grove clean the falls from the shore but from his current (upstream) point of view he's thinking Ty was going too slow. Now obviously something bad happened to Ty (with all of the whistle blowing and people scrambling around yelling and such) so Dave figures he needs to go faster than Ty did. Like maybe way, way faster. Finally he gets the 'all clear' signal and by then he's thinking: Faster.

So here comes Dave. I notice that he's paddling really hard and there he goes, over the flake, then past it on the left, where he just drops through (and behind) the falls and disappears. Dave said later "I knew I was totally screwed when I turned to boof off of the flake and just kind of skipped over it and kept right on going over the left side, so I said a little prayer and hoped for the best...."

As I watched in dismay he popped out of the curtain about halfway down on the left side and penciled in hard, but incredibly he didn't hit the bottom and he emerged from the maelstrom below with his usual grin firmly in place!

We all ran the Faucet just below with no problems, then we get to Double Drop, which is probably the scene of more carnage than any other rapid on this river. The Eugene trio was already there, and one of them has left his boat in the way so I can't get out. As I struggle to get out of my boat and grab his boat to move it boat slides off of the rock and drifts into the pool. No problem, I think, I'll just... But no, my boat is now moving out of the eddy. Tom paddles over and tries to stop it but before he can do anything my boat drops over the falls!

Ok, I won't repeat the profanities I yelled but I took off down the river as my boat blasted through the drop and goes charging drunkenly downstream full of water. Suddenly in the midst of my panic I hear Dave Mcneil yell: "WHAT'S THE LINE?!?" and someone shouts back gleefully: "DOWN THE MIDDLE!!!"

Ok... Now Dave has never run this rapid, never seen it, nothing. This is a class V+ eighteen foot double falls that has a hole so powerful folks have Religious Experiences in it on a regular basis. So here comes Dave, chasing after his buddy's boat, through Double Drop. He goes over the first part (about ten feet) and he doesn't lean forward enough, because he has never seen the drop, so he doesn't know that if you don't lean forward you won't punch the hole, etc etc... So Dave goes into the relatively benign top hole and comes out in a huge stern squirt, and before he can recover he goes over the second drop totally vertical and drops into the (bad) bottom hole upside down and backwards. Dave said later that when his boat hit the fold and stopped the force of the current came down on his body and literally tore him right out of his boat. (Because, he was upside down and backwards...)

Meanwhile, I go hurtling off of the rock wall into the pool below while Dave comes swimming out of Double Drop, laughing. (It was pretty funny....)

Anyway, my boat goes floating down towards the next drop with Dave and I in hot pursuit but we don't quite make it and it drops over the next horizon line. Frustrated, I scramble up the rock wall and run around to a ledge above the lower pool. Without slowing I leaped out into space and landed in the pool below the drop and when I surfaced I saw... nothing.

A couple of seconds later down comes Dave Grove, the Perception guy. He ran Double Drop ok and plops over ledge below, where I'm staring intently at the hole that thrashed me the first time I ran this river. "Where's your boat?!" he yells at me, and I point at the hole. "It's in there.." I reply calmly from my perch on a rock in front of the pourover. He waits with me for a few seconds and then says skeptically: "I don't think it's in there, man. I'm gonna go downstream and look for it."

"No- wait." I said. "I swam here at higher flows so trust me, the boat is under there somewhere..." Sure enough, a few seconds later the tip of my stern pops up, and immediately I jump in and try to grab it but it slips through my fingers and swirls inexorably back upstream where it disappears into the hole again. Frustrated, I floated along the wall as close as I dared and waited as the water swirled around me and after awhile the stern of my boat popped up again and I grabbed it and pulled it out.

Downstream we got to Zig Zag Canyon and a few folks had some creative lines here. (Note the wood sieve highlighted against the left wall in the first picture- a paddler died in there back in the eighties, so no matter what you'd better stay in your boat and off the left wall in this rapid. If you look carefully you can see one of the vertically pinned logs sticking up. There is also a cable hanging down into the river, and I don't know if this is for rescue purposes or not.)

The top part of this rapid (which is barely visible in these pictures) is the toughest, and a lot of people have bad, bad lines up there, which can be quite stressful with all the holes and wood and stuff waiting just downstream.
All of these guys are good boaters, and the variety of lines here demonstrate how hard it is to run this drop cleanly!

Remember that part about staying off the left wall?

Here's stunt boater number two getting spit out of the top part a bit ungracefully... (Thankfully he managed to recover from his daring and creative backwards/bracing position in time for the lower part..)

Immediately below Upper Zig Zag is (you guessed it) Lower Zig Zag. This rapid contains 'the move', a ferry from left to right to avoid an the undercut walls and a cave on the left.

We got to BZ falls and about half the group ran it without problems, including Dave Mcneil who had a no-portage first run down the Green Truss. Nice! 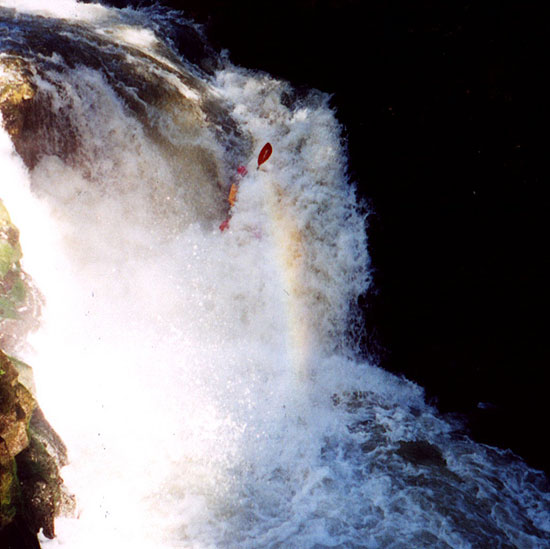